Construction of the Present church 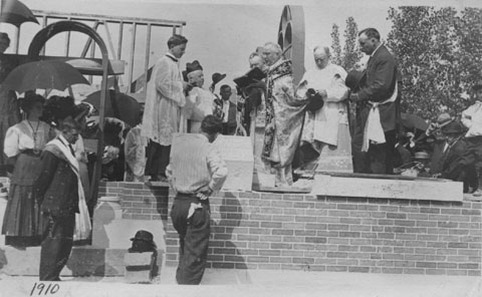 Prior to the spring of 1910, solicitations for the building of the new church and school had been going on for some three or four years, and an accumulative fund of about five thousand dollars had been compiled. The Church committee was comprised of Frank Vessely, Frank Dalka, and Joseph Dolezal, men of good sensible and prudent minds, as can readily be seen by the pretentious edifice that was erected for housing Our Lord. The building of solid brick, was built on the exact site of the old structure. The high ceiling sanctuary and the main body of the church with most elegant stained glass windows, and the front vestibule over which the choir loft was flanked on each side by steeples in which one has the bell, and the other the Baptistry, is the complete floor plan of our church. The school was also started at the same time, consisting of four large classrooms. This tremendous undertaking cost in the vicinity of $45,000, however this does not include the many hours that were donated by all parishioners of labor, as well as their hard worked teams of horses, hauling the sand from the basement, the unloading and hauling of the lumber and brick from railroad cars to the site, the mixing of cement, mortar and plaster. The corner stone for the church was laid on May 21, 1910, by the Very Rev. Louis A. Moench of Mishawaka, delegated by Bishop Alerding to perform the ceremony. On Easter Sunday, April 11, 1911, the church was ready for its first Mass. The church was completely furnished, with the exception of the High Altar and stations of the cross. These buildings carried a $40,000 mortgage. The yoke was of very great weight and it was felt for almost 20 years